Her Flag
Cancelled as a precautionary measure due to COVID-19
Visit HerFlag.com for updates and videos. 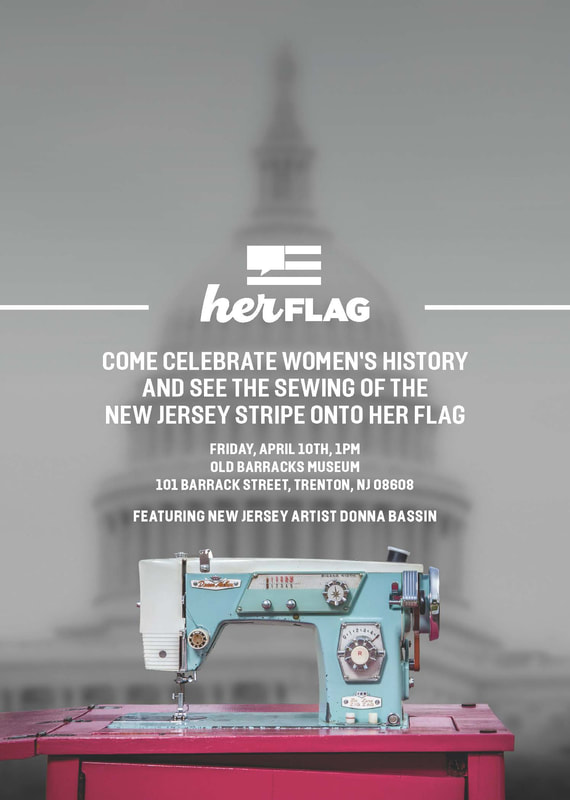 In 2020 America will celebrate the 100th anniversary of the 19th Amendment, which opened the door to give women the right to vote. One celebration is so big it had to start in 2019! It will ultimately take 14 months to complete! This celebration is growing in size and impact as it travels to capital cities in each of the the 36 states that voted to pass the amendment, in the order in which they ratified. Ultimately this celebration will measure 18 feet in height and 26 feet in width!  This celebration is epic in every sense of the word.

The celebration is called Her Flag. Her Flag is a giant collaborative art flag. A work-in-progress that’s making its way across the nation, growing stripe by stripe and state by state. And Her Flag will be in Trenton on April 10th, 2020.

Founder, artist Marilyn Artus, sews each state’s stripe, which was designed by a woman artist in that state, onto the flag at a live event in each capital city. This is her “love letter” to all the men and women who worked to pass the 19th amendment and she uses it as a platform to encourage women to exercise their right that so many fought for just 100 years ago.

New Jersey, the 29th state to ratify, will be represented by the 29th stripe sewn onto Her Flag. It's happening on Friday, April 10th at 1:00 PM at the Old Barracks Museum 101 Barrack Street, Trenton, New Jersey 08608. New Jersey artist/stripe designer Donna Bassin will be at the stripe sewing performance to present and reveal the New Jersey stripe and nationally renowned storyteller, teaching artist and folklorist Karen “Queen Nur” Abdul-Malik will be performing at the event! More info below and I hope to see you there!