Friday night from 3:00-11:00 PM in the Officers' House
Saturday morning 8:00-10:00 AM in the Officers' House
Event participants can bring their cars onto barracks ground to unload belongings starting at 4:30 Friday.
We ask that after you have unloaded, that you move your car to the parking lot adjacent to the barracks.
Cars will not be allowed to park on Barracks grounds.

Saturday, December 28
8:00 - 10:00 AM - Registration in the Officers' House – Bagels, Coffee inside the Barracks
9:15 AM - All officers meeting, Long Room, Old Barracks Officers’ House
10:00 AM - Formation, Crown Forces on Old Barracks Parade, American Forces in Barracks backyard (deployed as the States face the Old World, Northernmost  on the right, Southernmost on the left, Rolls taken, divisions sorted, safety inspections conducted.
10:30 AM - All troops march out to jump-off points for 1st Battle
11:00 AM - 12:00 PM - The First Battle of Trenton
Select Regiments Return to Barracks for "Spoils of Victory" (If you have not been notified of this by Asher Lurie, you are not involved in this portion.)
12:00 PM - Nooning at Masonic Temple, provided by the Masons
1:00 PM - Musket Demonstration by 17th Regiment at Old Barracks
2:00 PM - Formations, safety inspections - LOCATION TO BE DETERMINED
2:15 PM - All American troops at Old Barracks; no British forces to be on Parade Ground of Old Barracks. "My Brave Fellows" With enlistments about to end, Washington and his officers compel the Soldiers of the Continental army to stay on six more weeks beyond the end of their enlistments.
2:30 PM - Memorial Service for the Slain (practice going to "Mourn Arms" before coming*)
3:00 PM - 3:40 PM - The Second Battle of Trenton at Mill Hill Park
4:00 PM - Final Formation on Parade of Old Barracks and dismissal
Nota bene:  American Rifle Units - whenever the ground permits (obviously not when on the streets) will attempt to display in open order, two ranks (staggered). Riflemen were a form of light infantry and deployed as such during much of the Battles of Trenton. Obviously we can deploy you in the houses firing from cover (considered tacky by the local residents), but when in the Park open order is preferred.

*Mourn Arms
Here is the broadside depicting funeral motions in use at the time of the Revolution. They were shared by Greg Urwin via Facebook, and his notes on the text follow. 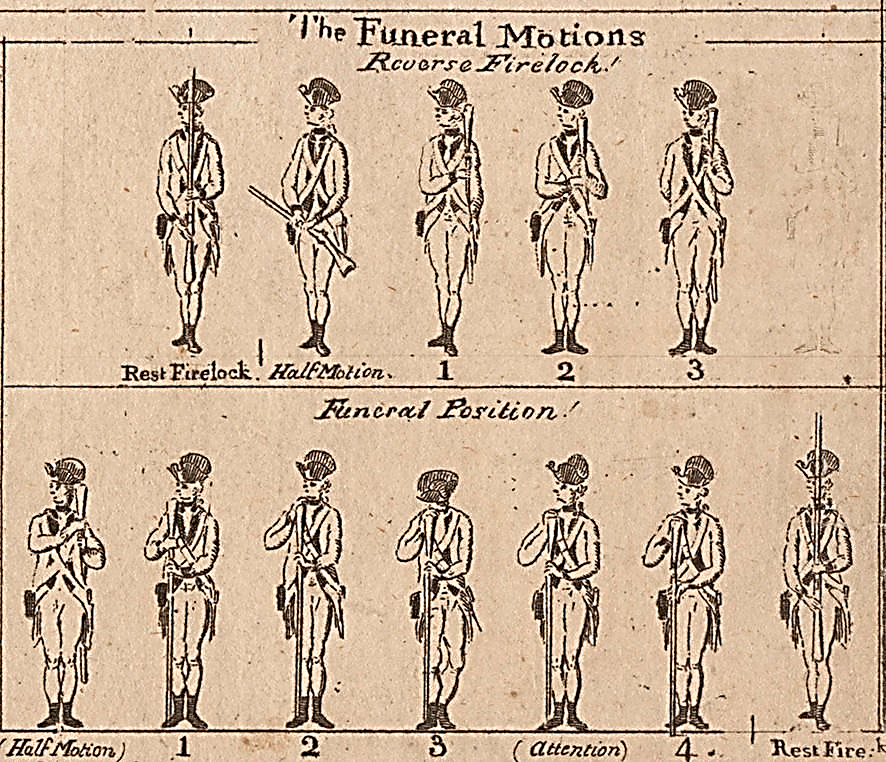 "The upper part of this detail shows the motions involved in performing “Reverse Firelock.” The directions for this drill are given at the bottom of the broadside: “Reverse Firelock! – From the Rest, -- quit Right Hand, and in reversing, guide it close down the R Arm, when level seize ye swell with RH, (as Halt Motion) and continuing to reverse it with RH, bring it under Left Arm, bringing up R Foot, Barrel in Front (as Fig: 1) seize Cock with LH, Thumb under the Pan (as Fig 2.) quit RH, and seize the Sling behind (as Fig. 3.)”

The lower part of this detail illustrates how to assume the “Funeral Position! – RT H seize small of ye Stock as (Half Motion) placing Muzzle on, or outside RT Foot (as Fig 1) RT Hand Flat on rear of Butt as (Fig 2.) recline Cheek on RT Hd. standing easy L Hd. still on Cock (as Fig 3.) – Attention!. – To Rest Firelock! Place L Hd. under Stock, feeling the Feather Spring, Thumb along the Barrel, and  bring it round to the Rest.”

Please Note:
• There will be no individual "walk-ons" allowed at this event and no unregistered units. You must be a member in good standing of an invited unit.
• All invited units are members of one or more of the following: Brigade of the American Revolution; British Brigade; or Continental Line.
• The Old Barracks adheres to BAR safety regulations. Loading of infantry and cavalry weapons will be from paper cartridges only, not from horns. Priming horns shall contain 2 ounces or less of powder. The fixing of bayonets and bayonet charges during tactical will only be conducted at the pre-planned and controlled times and scenarios.
• We plan to execute most maneuvers during the Battles at a quick pace. If we will not run, we might at least jog for portions of it. Nothing looks worse to the public, especially to the young people, than re-enactors in a battle walking and looking like there is nothing frightening or enervating happening. It also does a disservice to the soldiers we are supposed to be portraying. I have cranky knees, but I can do it. If you cannot, please opt to interpret the battles to the public along the curbs or rope lines rather than shoulder you weapon and hobble through, disrupting the pace or getting hurt yourself.
• We prefer that no one appear with any more than perhaps a week’s growth of beard, if even that. You have all winter to grow it back.
• Absolutely NO sunglasses, “period” or otherwise, will be permitted (Franklin may have had them but practically no one else), and NO modern glasses.
• All shoes are to be proper to the period or well-covered by proper spatterdashes or half gaiters.
• As we have reminded American troops since 2001, the most common clothing for American troops at these battles was civilian attire. Next most common were hunting frocks and overalls. Third would have been early war regimentals (try not to look post 1779).
• If you are not planning to wear your round or cocked hat (or miter), please be aware - the great numbers of men wearing bright red “Liberty Caps” has become a very overdone cliché. Many may have worn the Canadian or French influenced “tuque” which was knit rather than crocheted and usually of more earthy colors (reds would be darker or more “madder”), Canada caps (with the fur), or Monmouth caps (which were usually of earthy tones, quite thickly knitted, and did not hang down. 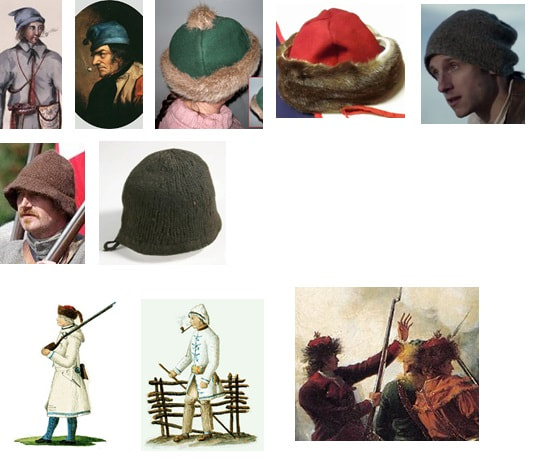 • Great coats were most often available only to officers and sentries. It would be rare to find private soldiers wearing them.
• Soldiers tended to carry little with them, especially about their person (unless in a proper pack, bedroll, or tumpline – and the Americans did not wear these into these battles – except blankets that many wore to cover their shoulders), so please….avoid the temptation to fill belts, etc. with extra impedimenta looking more like a bad pirate cartoon. This happened again last year.
• Take the time to pick up needle and thread and TRY to make your clothing FIT!!!!! Increasingly entire units are showing up with very ill-fitting clothing, usually too baggy, bordering on the comical. God blessed you with fingers and opposable thumbs, teach them to do something useful!
• If you have new recruits who are unfamiliar with the drill, and you’ve thrown just any spare clothing on them to show up with “numbers”, PLEASE DON’T. Sometimes “less is more”. This rapidly growing trend has had a degrading effect upon the whole appearance-wise, and has been manifestly unsafe. Remember, this is one event where the public gets very close – we all want that access to be safe and to make a high quality impression. This happened again last year.
• Fifers and drummers must not be playing tunes throughout battle re-enactments. The playing of tunes should only happen when the unit you are with is disengaged for a period of time. Officers in the 18th Century, and officers now, do not want music to interfere with the giving of commands, so during battle, fifers and drummers should only be playing commands. They must also restrict themselves to only appropriate music of the 18th Century (some Civil War tunes have been cropping up). This happened again last year.

As at this event in the past, your members, while in their period dress, will be entitled to a 10% discount on purchases from our Museum Shop (The Quartermaster's Store).

Please fill out the attached roster sheet, attach an up-to-date copy of your unit’s insurance and return to: https://forms.gle/LXbM2DkUVbfkTSPq5
By 11/30/18, otherwise you will not be on our registration list for the event and will be unable to participate.

About the Trenton Barracks

In 1758, after two winters of Regulars being quartered “on the population” in Trenton, more than 50 Trentonians petitioned the Provincial Assembly to build barracks, as did prominent citizens in other New Jersey towns. Perth Amboy and Burlington were the only towns in New Jersey with populations around 1,500. Trenton, New Brunswick, Elizabethtown had between 900 and 1,100 people. Princeton was just a wide spot in the road. Accommodating even one regiment of approximately 1,000 men in any one place would swamp the local economy, so New Jersey opted to build 5 sets of barracks. Each barracks was roughly the same size, accommodated 250 to 300 men each, was one day’s march from the next one, and connected the Delaware just North of Philadelphia to New York harbor (North to South – Elizabethtown, Perth Amboy, New Brunswick, Trenton, and Burlington).

The Trenton Barracks had 20 squad rooms, each 15’ x 15’ accommodating 12 men (2 messes) each, in a basic “U” shape around a central parade. The basement was made up of store rooms and two kitchen hearths in the basement of the center block and one kitchen each in the basements of the North and South wings. We presume that two men from each room, would take the rations and the kettles from the two messes occupying that room, down to the basement kitchen in their wing to prepare meals. Meals were eaten in the squad rooms.
Squad rooms were each provided with a table, a pair of benches, one iron candlestick, one broom, and chamber pots. Each week a quarter cord of “firing” and 11 candles (1 pound) were allotted per room. Although we bake bread in a clay oven in the backyard, bread was likely purchased from one or more of the bakers nearby.
​
The current property within the fence is similar to the original footprint (9/10 of an acre). However, the back yard was not level as it is today; it pitched sharply towards the southwest as much as 15 to 18 feet down to Petty’s Run, which ran just behind the Barrack fence. The yard likely held an enormous quantity of firewood. To imagine just how much was issued to just the 20 squad rooms each month (not including the kitchens, Officer’s House, or guardrooms) envision the footprint of our parade four feet deep with wood. Typically, troops arrived in late November and stay until early April.