​**This event is being rescheduled. New date TBD**

Shop
Beulah Oliphant, through her foresight and determination, led the effort to preserve the Old Barracks, which became a museum in 1902. This award is named in her honor, and is presented annually to women in recognition of their outstanding contributions to New Jersey history in historic preservation, education, or scholarship. 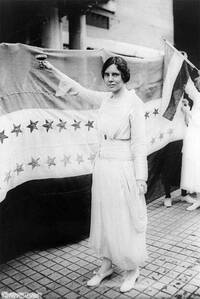 2020 Honoree - Alice Paul Institute and Founding Members
"There's nothing complicated about ordinary equality." - Alice Stokes Paul
The Alice Paul Institute was founded in 1984 by a group of visionary women dedicated to honoring the life, legacy, and ideals of its namesake, Alice Stokes Paul. Throughout her life, Alice Paul was committed to the cause of equality. She was a founder of the National Woman's Party, authorized the Equal Rights Amendment, and was crucial to getting the 19th Amendment to the Constitution ratified in 1920. The API was established to ensure Paul's dedication to equality and leadership is preserved and passed onto future generations. Their mission is fulfilled by providing educational programs to nearly 3,000 students annually, giving tours of Paulsdale, and hosting leadership programs for middle and high school girls.
The Founding Members of the Alice Paul Institute are NJ Senator Diane Allen, Elsie Behmer, Judith Glick Buckman, Christine Borget, Nancy Buchanan, Barbara Haney Irvine, Dee O'Neil, Patricia Owens, Jean Perry, Nancy Quinn, Diane Quinton, Janet Tegley, and Patricia Kane Williams.

About Beulah Oliphant​
Born in 1840, Beulah Ann Oliphant was the daughter of Joseph Oliphant, who operated the Oliphant Mill near Medford, New Jersey. She was a teenager when her father passed away, leaving an estate whose income was insufficient to support Beulah and her family. She defied social conventions governing women of her class, and despite fierce opposition from relatives, became a teacher. She was to follow this profession for twenty years.
She later married General Samuel Duncan Oliphant, who shared the same last name but no close blood ties, and became mother to ten stepsons. When the south wing of the Old Barracks was advertised for sale by the Widows and Single Women’s Home Society in 1899, Mrs. Oliphant and other Trenton women worked for three years to raise the $6,317 to purchase the building. In 1902, the Old Barracks Association was incorporated and a museum established.

Thank you to the sponsors of the Beulah Oliphant Award: