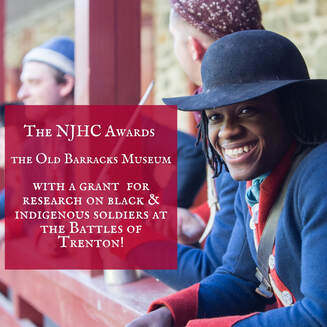 The New Jersey Historical Commission (NJHC)  awarded 14 organizations across the state with Inclusive History Grant funds totaling $306,123.
The funds are meant for a variety of work across the disciplines of archeology, research, interpretive planning, and oral history. However, all projects will focus on uncovering, exploring, and presenting to the public, under-represented narratives in New Jersey history.
“Telling complex, diverse, and nuanced histories will continue to be a priority of the New Jersey History Commission, and this funding is an important next step to achieving that essential goal,” noted Secretary of State Tahesha Way. “These grants will support a wide range of disciplines and give our history stakeholders the tools to create and maximize the educational and programmatic impacts for diverse audiences ahead of, during, and in the aftermath of America’s upcoming 250th anniversary.” - Morristown Minute, Dec 2022
We are proud to be amongst the recipients of this fantastic research grant from the New Jersey Historical Commission.
The Old Barracks Museum (OBM) is seeking a Research consultant to investigate Black
and Indigenous soldier participation during the Battle of Trenton. The findings will be
used in an upcoming OBM exhibit and other educational programming for the
celebration of the Semiquincentennial of the United States.
Click here for Request for Proposals

In-Person School Tours for Spring of 2023 are now available for groups of up to 40 visitors
​Please contact Michelle at groups@barracks.org or 609-396-1776

The Old Barracks Museum preserves the history of a building constructed in 1758 as a French and Indian War military barracks, used as winter quarters for British soldiers. Throughout the Revolutionary War, the Barracks was used for a variety of purposes by both the British and the Americans. British prisoners of war were held in the Officers' House, four companies of the Second New Jersey Regiment of the Continental Line were raised here, and in 1777 the Barracks became an army hospital under Dr. Bodo Otto, who oversaw smallpox inoculations for the Continental Army. It also stood witness to Washington’s crucial victory at the Battle of Trenton.
At the beginning of the 20th century, members of the Daughters of the American Revolution and the Colonial Dames organized The Old Barracks Association and spearheaded a campaign to purchase the building. The building has been a museum for over a century, and has frequently been used as a symbol for the state of New Jersey.
The Old Barracks Museum is open year-round, Wednesday-Saturday. Three galleries are available to view in addition to our historic rooms being interpreted throughout the day. Be sure to check out the Events Page for upcoming special events and information about Patriots Week. History lovers are encouraged to become a member of the Old Barracks Association to help support the museum's mission and programming.
Schools and groups are welcome year-round - program information is available on the Group Tours page.